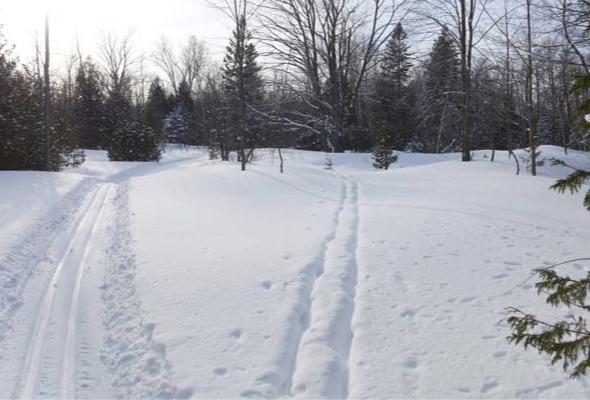 Our 2016 cross-country ski season has been somewhat of a rollercoaster ride as far as temperature and snow conditions were concerned. However, the Sawmill Nordic Centre cross-country ski and snowshoe trails in Hepworth, Ontario, withstood what mother nature threw at us. To this point we have had great snow coverage and very good ski conditions.

Our grooming team of Harry Hong, Neil Sim, Dj Perrin, Zane Davies and Fred Scheel have been able to provide our members with excellent tracks and skate lanes. We hosted five major ski events between January 7th and February 22nd and delivered a good product for these events.

Enjoy the rest of the ski season.

Despite a late start and several interruptions by a day with rain, the four core loops of the Rankin ski trails have been ski-able since the 14th of January. The northern and new southern loops were groomed after we got enough snow in the 4th week of January.

Not a bad winter considering that many cross-country skiers from southern Ontario think this is winter without snow even up here.

A big thank-you to Peter, our tireless groomer who kept the trails groomed under these varying conditions this season and kept us well informed by posting the trail conditions promptly on the Bruce Ski Club website. A big thank you to all the volunteers who helped in fall to prepare the ski trails, and last but not least, to all our generous land owners, who permit us to have our trails on their lands.

The arrangements for parking and the port a potty worked well as usual. As the restaurant of the Red Bay Lodge was open after 4:30pm Thursdays to Sunday, a ski trip ending at 4:30 pm could end with a drink or early supper at the Lodge.

Work at a cross-country ski trail system never stops and Rankin is no exception. The new Sky Lake loop is fun to ski, but this mild winter revealed some wet spots and at least one correction to the original layout. I am confident that we will get all of that done this summer and fall, as Rankin has a great group of dedicated volunteers working with the trail captain.

If you have been new to Rankin and loved it, why not join that volunteer group? Or if you skied on the Rankin Trails at Red Bay this season and have suggestions and/or feedback, let your trail captain know.

Have a great summer and see you again at Rankin in fall and winter 2016-17.

With a late start and an early ending, this season at Colpoys Ski Trail could be described as “short but sweet”. We were able to ski for all but a few days from the first week in January till the first week of March. Conditions were generally good, although we always seemed to be living close to the edge as the thermometer went on it’s roller coaster ride throughout the winter.

Thanks to our principal landowner Ron Gatis for generously sharing his property with us once again, and to Keith Butchart for keeping the parking lot cleared. Thanks to Zane Davies for helping with grooming the ski trails and Mike at Pinkerton Automotive in Wiarton for keeping our grooming machine in operation.

Please remember to join us next fall to clear the trails in preparation for the 2016/17 season.