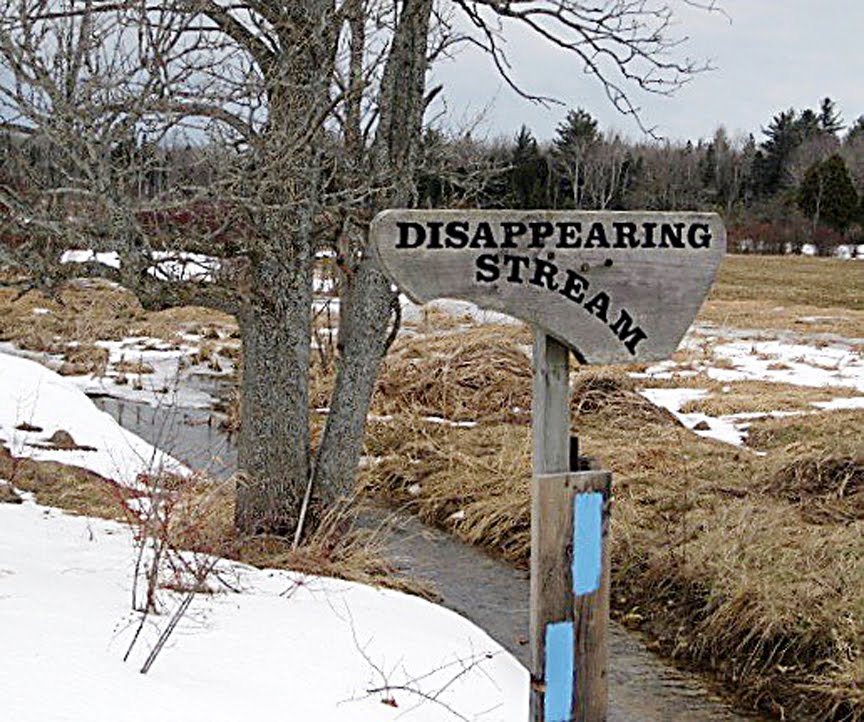 If you’ve skied at the Colpoys ski trail (and if you haven’t, you really should) you may have noticed a small sign just off the trail to your left as you ski across the field toward the gates. Get up a little closer and you’ll see that it says “Disappearing Stream.”

If we’ve had a really cold spell, it will indeed have vanished beneath the ice and snow and there may not be much to look at all. But underneath that blanket of white, the stream of water leaving the beaver pond is dropping into a deep crevice in the limestone bedrock, and continuing on it’s journey through  an underground network of caves and fissures to Colpoy’s Bay.

This feature  is part of the Karst topography that is so common on the Bruce Peninsula. In fact, the Peninsula has the richest and most varied collection of Karst features in Ontario. Karst is sometimes known as “nature’s plumbing.” Just as plumbing in our homes channels the water where it needs to go, these underground channels help to drain and filter the surface water as it makes its way to the bigger bodies of water.

A small pipe has been placed vertically into the crevice and at any time of the year a person can hear the subterranean symphony by carefully putting ones ear close to the end of the pipe.

So the next time that you are  skiing across the fields towards the gates, think of the water rushing through the rocks beneath your skis and take a moment to stop and listen to the music of the “Disappearing Stream.”

Thanks to Daryl Cowell of the Owen Sound Field Naturalists for help describing Karst topography.